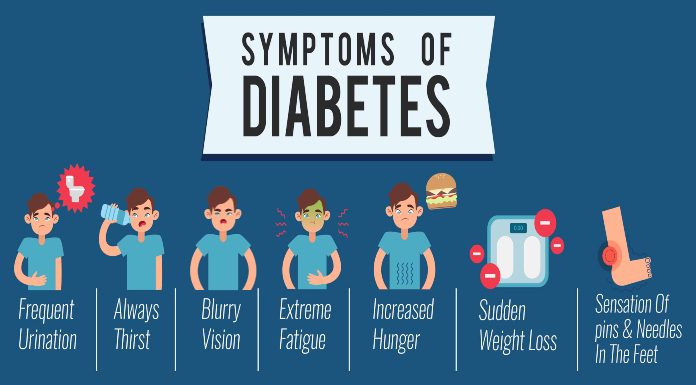 Diabetes Symptoms – Do you know that humans can get more than 10,000 diseases, and only 500 of them have a cure? It is around numbers, so do not get confused and go for Fact Check, but it is true.

There are more than 9500 diseases in the world that do not have any cure, and humans can just treat them. For example, diabetes. If you get diabetes, there is no cure for it, and you just have to treat yourself and move on with your life.

Let’s take a look at all the diabetes symptoms and other aspects such as treatment, diagnosis, and types.

Diabetes, also known as diabetes mellitus, is a condition in which the body of a person is not able to take up sugar into its cells and use it as energy. As a result, it builds up extra sugar in your bloodstream, which causes multiple problems for the body.

If you do not control diabetes, it can cause serious problems, including damage to your other body organs, including the heart and kidney.

For Disease Control and Prevention, a national diabetes statistics report told us that more than 37.3 million Americans, which is 1/10th of the total population in the United States, have diabetes.

In the year 2019, more than one and a half million new cases of diabetes were diagnosed in the United States.

As per the Centers for Disease Control and Prevention, diabetes mellitus has more than seven types, but usually, you will hear about three or four major types.

Let’s take a look at all the types of diabetes mellitus before we talk about the diabetes symptoms.

As its name suggests, type 1 is the first type of diabetes mellitus. Usually, it begins in childhood, which is why it is called juvenile-onset diabetes.

It is an autoimmune condition that usually happens when your body attacks your pancreas with antibodies. In that condition, the organ is damaged, and it stops making insulin or makes very little insulin.

People affected with type one diabetes need to take insulin every day. That is why many times, experts call it insulin-dependent diabetes.

Type 2 diabetes is the most common type of diabetes. Experts usually call it adult-onset diabetes, but in the last few decades, it has become more common in children and teens.

One of the biggest reasons for type 2 diabetes is overweight or being obese. More than 90% of people diagnosed with diabetes mellitus Have type 2.

On the other hand, type 2 diabetes raises the risk of heart disease and stroke.

Usually, doctors recommend exercising more than ever before, and losing extra pounds even as little as 5% of your total body weight can lower the risk of type 2 diabetes in a pre-diabetic condition.

Apart from these, there are a few less common types of diabetes, including monogenic diabetes syndrome, drug or chemical-induced diabetes, and size cystic fibrosis-related diabetes.

What are the Diabetes symptoms?

Let’s take a look at all the diabetes symptoms. We will discuss the symptoms of diabetes by their types but let’s first discuss all the general and common Diabetes Symptoms.

One of the most common symptoms of diabetes is the urge to pee. In nearly 95% of confirmed cases of diabetes, the patient will urinate more frequently than ever before.

It is also one of the first symptoms rich people recognize from the long list of symptoms. Apart from that, your urination might get lower in volume and more in frequency.

If you are always thirsty and Gopher urinates more than a normal person should, then you should get yourself tested for diabetes. As per the data, more than 80% of pre-diabetic people are not aware of their condition.

Slow healing is also one of the most common symptoms of diabetes. If you have diabetes, then there is a high probability that any cut or soreness will not go easily.

Generally, doctors recommend everyone to get themselves tested for diabetes if they are experiencing slow healing. Even though slow healing can be caused by other conditions, testing is one of the best ways to detect it earlier.

Most diabetic people will experience numbness or tingling in their hands and feet. It is also a very common symptom of diabetes. Usually, you feel restless, and it gets very hard for you to get a good night’s sleep.

As per the experts, if you have recently discovered that you are getting the blurry vision, then you should get yourself tested for diabetes.

Blurry vision is one of the most common problems, and most diabetic people experience some sort of blurry vision.

Apart from being thirsty all the time, diabetes can also cause extreme hunger and fatigue at the same time. Even after eating your food, you might feel hungry, which is a very common symptom of diabetes.

Diabetic people easily get fatigued and take more time to recover than a normal person. If you are experiencing any of the above symptoms, such as hunger and fatigue, you should get yourself tested.

symptoms of type one diabetes

Other than the above-mentioned symptoms, there are a few specific symptoms for each type of diabetes. People who are suffering from Type one diabetes can also develop nausea and a constant feeling of vomiting. Apart from that, used infections and urinary infections increase in their frequency.

Similar to type one diabetes, type 2 diabetes also has a few specific symptoms. People affected with type 2 diabetes can develop these symptoms over several years. Pain or numbness in your feet and hands, along with slow healing of sores and cuts, is one of the most common symptoms of type 2 diabetes.

Diagnosis and treatment of diabetes

Let’s take a look at the diagnosis and treatment of diabetes. The American Diabetes Association recommends frequent testing for diabetes because type one diabetes often appears suddenly.

Let’s first take a look at the diagnosis of diabetes. The American Diabetes Association recommends everyone get themselves tested for diabetes if they have a body mass index higher than 25 regardless of age. Apart from that, people older than age 45 are also advised to get themselves tested regularly.

The glycated hemoglobin test is one of the most effective tests for diabetes. It is a blood test that does not require any type of fasting. It usually indicates your average blood sugar levels for the past two or three months.

There has been no development in diabetes tests. Now you can take oral glucose tolerance tests. Usually, you have to fast overnight, and the fasting blood sugar level is measured in this test.

Now let’s take a look at the treatment of diabetes as you are already aware that there is no cure for diabetes, but you can treat it.

There are multiple treatments available for diabetes, and your doctor might recommend a combination of a few treatments. We have listed down all the possible treatments.

No, currently, there is no cure available for diabetes.

What happened to the person with diabetes mellitus?

Diabetes can cause a lot of health problems to a person, including not healing injuries and constant how urge to pee.

How to Find And Fix Problems With Wireless Mouse? – 4 Main Problem

Things To Do In Park City – In Utah, In Summers, With kids