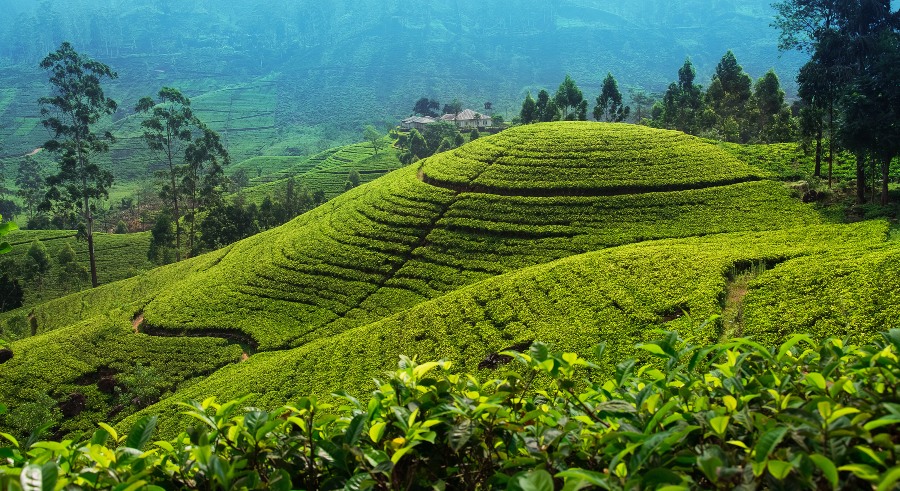 Tea Production In Sri Lanka – Even though tea has a rich history in the world, especially in China and India, the production of tea started in the 1800s when the British brought it. First of all, the tea was planted in Royal Botanical Gardens, Peradeniya.

Soon after the first plantation, tea became a popular crop in Sri Lanka. Back in 1893, One million tea packets were sold at the Chicago World’s Fair. It was a huge accomplishment for the Sri Lankan. Currently, Sri Lanka produces more than 300,000 metric tons of tea each year. Let’s take a look at a few facts and Other information regarding the production in Sri Lanka.

Sri Lanka is the 4th largest tea producer and exporter in the world. Currently, the country is struggling on both fronts. In the last ten years, Sri Lanka tea production has seen a cut of near to 20% in production numbers.

As you can clearly see from the above-given data, the tea production in Sri Lanka is going down year by year on average. At the same time, exports are also dropping. The current financial crisis is also creating a dangerous situation for the industry.

Now let’s take a look at all the major tea importing countries from Sri Lanka. The Sri Lankan tea industry plays a huge role in the country’s export business.

Even after so much slump in production and export, tea still brings $1.2 billion in foreign exchange for Sri Lanka. The country exports tea to every major country in the world. Here are the export statistics for 2021.

The total export of Sri Lanka is around 15 billion, and tea production adds $1.1 billion to the total number. The total number comes to around 6.6%, which is a very heavy number as compared to any other country with one specific product.

The Sri Lankan economy was expecting this number to grow by 50% as the country was switching to organic farming by putting a ban on Synthetic fertilizers. But as per the current situation, that decision is more like a backfire rather than support.

The production of tea is going down, and so does the economy of the country. Citizens are going through the worst financial crisis ever, as inflation has risen to 17% in February 2022.

Let’s take a look at the major tea-growing areas of Sri Lanka. As you are already aware, tea production plays a major role in the Sri Lankan economy. Once, tea production was one of the biggest foreign exchange fetchers in the country.

The major tea-producing areas of Sri Lanka are Kandy and Nuwara Eliya in Central Province, Galle, Matara and Mulkirigala in Southern Province, Badulla, Bandarawela, and Haputale in Uva Province, and Ratnapura and Kegalle in Sabaragamuwa Province.

Currently, Sri Lanka has more than 222,000 hectares of land under tea cultivation. More than 49% of total cultivation land is growing low groan tea. At the same time, the high growth is just 19%.

In March April 2022, Sri Lanka is facing the worst economic crisis ever. The inflation reached 17.5% in February 2022, which is a record high for the Sri Lankan economy.

At the same time, the residents are struggling to get essential items such as food, cooking gas, electricity, etc. You can easily see low power cuts and people standing in queues in the national capital for essential items.

Currently, the situation is so bad that the Central Bank of Sri Lanka is forced to buy oil from Iran by bartering tealeaves. Once again, the industry of tea production is proving its importance in the Sri Lankan economy.

Many experts believe that a ban on synthetic fertilizers and pesticides by the Sri Lankan president backfired big time. Currently, the country is in an economic crisis and food crisis at the same time.

The tea industry alone has hit the Sri Lanka economy with more than 400 million U.S. dollars. At the same time, rice production has also seen a hit of more than 20% in the country.

Problems And Benefits of Tea Production In Sri Lanka

Now let’s talk about the benefits of tea production in Sri Lanka and what are the major challenges or problems production houses face. We will talk about both of these things.

Tea production in Sri Lanka has been playing a vital role in the economic development and budget of the country. Sri Lanka is one of the top five tea producers and exporters in the world. The Sri Lankan economy heavily relies on Tea production. That is why it has become the most relevant and crucial part of the Tea industry worldwide.

In the country, Tea production provides employment directly or indirectly to more than a million people. It has been one of the biggest employment industries in rural areas of the country.

Now let’s take a look at the challenges or problems faced by the industry in Sri Lanka. Mere benefits are not going to give you a complete understanding of the industry.

The Sri Lankan economy is sinking. There is no doubt on that front. Similarly, the Tea industry in Sri Lanka is also facing downward, and major domestic and global issues are affecting the quality and quantity of the production.

Apart from that, international competition is also impacting the price and profitability of the industry. Basic problems, such as aging and debilitating tea bushes, lack of worker and staff training, soil erosion, high wages, shortage of labor, poor living and working environment along with the high cost of production, and low profitability are impacting the overall tea production and export.

At the same time, the younger generation is also leaving the industry, and they have been aspired for upward social mobility by other industries. Climate change is also impacting production as the whole tea production industry is influenced by agricultural conditions.

The change in environment is also impacting the quality of the product, which is also taking away the interest of buyers. The final nail in the coffin is becoming the strict regulations of export.

Tea Production In Sri Lanka plays a major role in every sector of the country, including the economy. As per the statistics, Tea Export is 6.66% of the overall export of the country.

Basic problems, including aging and debilitating tea bushes, lack of worker and staff training, soil erosion, high wages, shortage of labor, poor living and working environment along with the high cost of production, and low profitability are impacting the overall tea production in Sri Lanka.

The recent decision on banning synthetic fertilizers in the country and switching to 100% organic farming has backfired. Currently, the country is going through the worst economic crisis ever. At the same time, Tea Production In Sri Lanka has also slumped by more than 20%, and it will also reflect in its export numbers.

How much tea does Sri Lanka export each year?

As per the statistics, Sri Lanka exports tea of more than 1 billion U.S. dollars in value. It includes every kind of tea, including black tea, green tea, and packed tea. Currently, the Sri Lankan produce more than 23,000 tons of tea each year, and they export most of that tea.

Why is tea Production In Sri Lanka going down?

In 2021, the Sri Lankan president announced that they are now going to ban synthetic fertilizer and will switch to 100% organic farming. That decision backfired big time, and now the country is facing the worst economic crisis ever. A similar decision also impacted tea production in Sri Lanka, and now it is going down.

COVID Booster Shots Near Me – Booking/Appointment – 2022