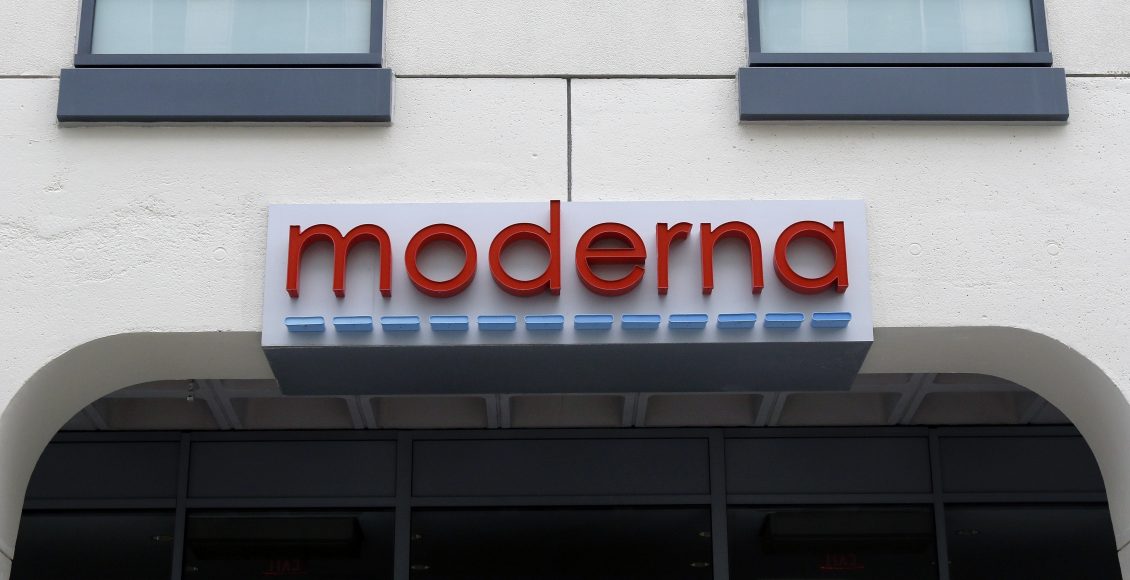 FILE - A sign marks an entrance to a Moderna building in Cambridge, Mass., on Monday, May 18, 2020. On Wednesday, Jan. 26, 2022, the pharmaceutical company announced it has begun testing an omicron-specific version of its COVID-19 vaccine in healthy adults, the same week that competitor Pfizer began similar research with its reformulated shots. (AP Photo/Bill Sikes, File)
Share

Moderna Omicron Booster – Moderna Has surprised us for a very long time. First of all, Moderna announced that they are very positive For their vaccine, which will soon get approved by the Food and Drug Administration of the United States to vaccinate everyone below the age of 5.

It was not just an announcement, but it happened when the Food and Drug Administration, along with the Centers for Disease Control and prevention of the United States, announced the organization.

Now, they have stated in a press release that their new version of the vaccine is more promising and has superior antibodies against the omicron variant compared to its normal shot.

As soon as the company announced that they are going to submit its data to the Food and Drug Administration of the United States in the upcoming weeks, it reignited the whole debate of which vaccine is better.

A few days ago, Moderna announced in a press release that they are testing a new variant of its COVID-19 vaccine. The results of that variant are better than its regular shot.

In the statement, they further mentioned that the latest version is being used as a booster shot, and they are going to share the data with the Food and Drug Administration of the United States.

In its latest booster shot, the company has mixed both the original strain of the virus and the latest omicron strain. Mixing both strains give tremendous results against the spread of the virus. Now, the vaccines can be more than two times effective as compared to original data points.

How effective is the Moderna Omicron Booster?

In a similar statement where the company mentioned that mixing 2 strains of virus gives tremendous results, they also talk about the effectiveness of the new Moderna omicron booster.

The company mentioned that giving vaccinated volunteers a booster shot with the latest omicron variant increased geometric mean titers, which is a measure of antibody levels by eight folds.

You might not believe it, but it is that effective. Health experts are not surprised as every health expert in the world adds that we might require booster shots every year as these viruses are going to come back with different variants.

Now, Moderna has proved that. We might not require boosters every year, but in a gap of a few years, it can be possible. The one thing you should note here is that it can increase the antibody levels by eight holes which is pretty impressive.

It is not new news for the FDA as they have already been working on similar projects. The current effectiveness of the COVID vaccine is on a much lower side as compared to any other vaccine in the world.

For example, the vaccine for shingles might be effective for three or four years, but after getting the vaccine, you will not get shingles. Guarantee.

On the other hand, there is a huge probability that you will get infected with the virus even after you have received the vaccine along with its booster shots. That is why people were more concerned, and the Food and Drug Administration of the United States understood those concerns.

After 10 days, on June 28th, the Food and Drug Administration of the United States is again going to have a meeting on whether and how the COVID-19 strain composition of the COVID-19 vaccine should be modified.

Both companies have been putting pressure on the Food and Drug Administration to put this site as early as possible so that they can deliver those booster shots in the fall.

The stance of the European Union

Similar to the Food and Drug Administration of the United States, the European Union medicines agency also started rolling reviews on Friday. They are also going to review the similar dilemma FDA is having in the United States.

Even the European Medicines Agency is more concerned about the use of two-strain vaccines. Previously all the companies were using the original strain first identified in China back in November 2019.

And, now the companies have interest in the latest omicron variant in their booster shots. One of the biggest dilemmas for all of these agencies is what will happen to those people who have already received the 4th vaccine, which is the second booster shot.

Apart from that, another question is going to haunt both of these agencies. Is it going to be the fifth shot, or is it going to replace the second booster shot?

There are so many questions both the agencies have to discuss in the meeting. The rolling review is going to continue until there is enough data for a formal marketing application.

While the above-given questions and concerns are going to haunt both of the agencies, the rising cases of COVID-19 in their respective regions have also raised safety concerns. No country wants to go into a situation like the first wave, where people were not able to get any treatment at all.

When will the new Moderna omicron booster be available in the market?

Get a Free Moderna Booster Shot Appointment in 2023

Check Eligibility for Free COVID Booster Vaccine Near Me 2023